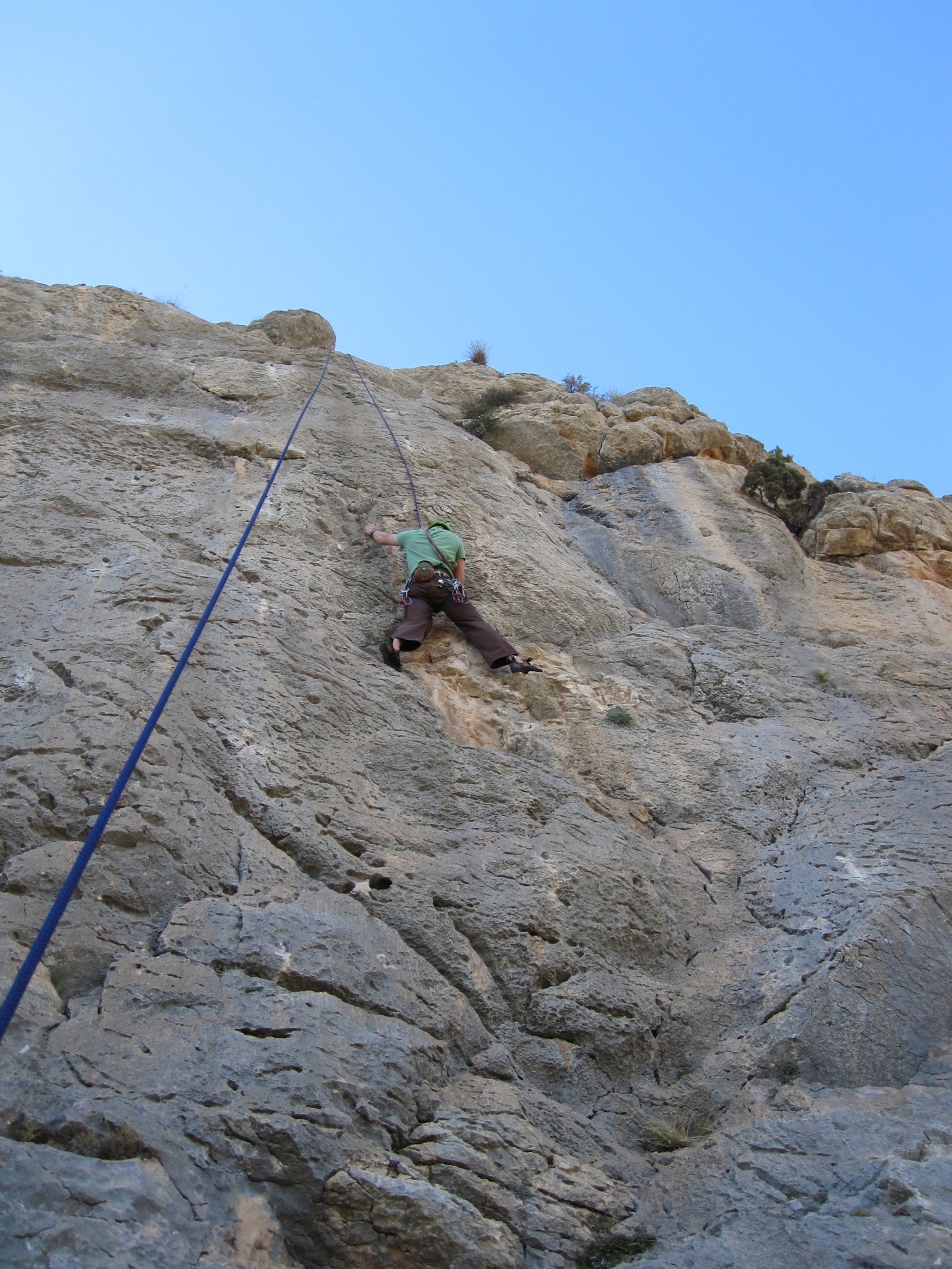 A colleague pointed out to me the other day that it would appear I no longer travel anywhere at all. This isn’t quite true; I just don’t update this blog any more, preferring to write my rather dull, and still only occasional “this is my life” missives over here.

So, in the intervening two years, since May 2014, Richard has been on another climbing holiday to the Costa Blanca. This is his climbing buddy doing some top-roping: 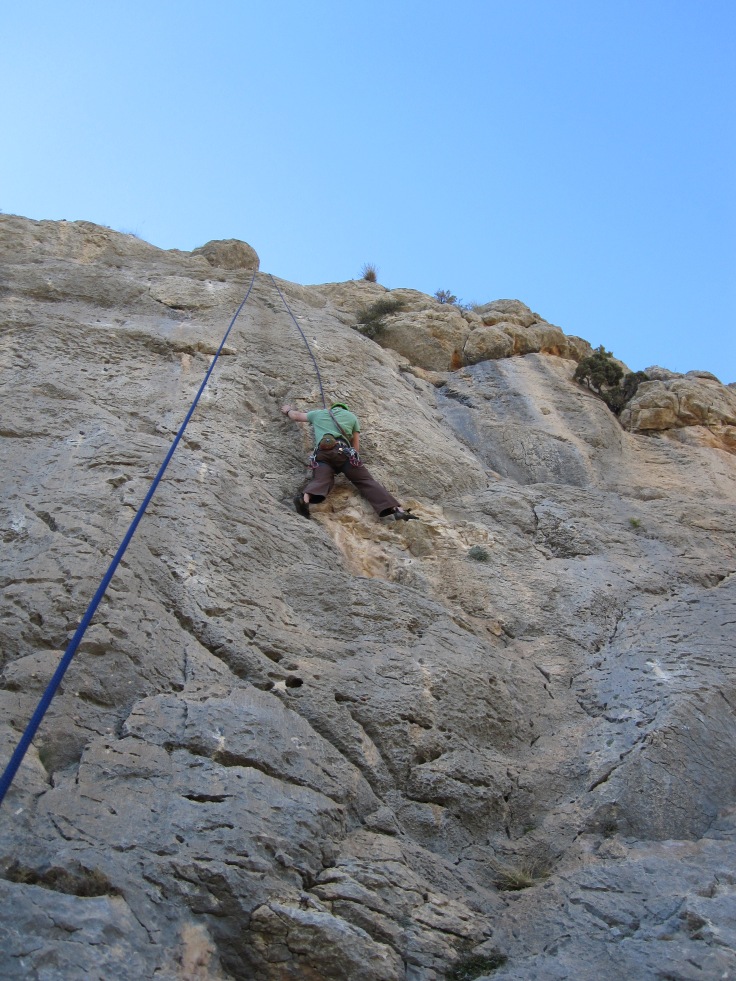 We then decided that climbing trips were all going to be great fun, so we decided to take our 6 month old with us on a trip to Fontainebleau, over Easter. I did know that basically every single person in France travels to their families over Easter, but somehow I thought this would make no difference to the traffic. It took us 12 hours of sitting in a gridlocked traffic jam, with a wailing screaming baby, to reach Fontainebleau. Conrad had a massive cold and wouldn’t sleep the entire time. We went out to the boulders, but Conrad threw up everywhere and cried, so we didn’t really climb. By Saturday he had given us the stinking cold, and on Sunday morning, we cut our losses and got back in the car for the long drive home. Here’s Richard and Conrad trying to enjoy some random Napoleon re-enactment in Fontainebleau town centre: 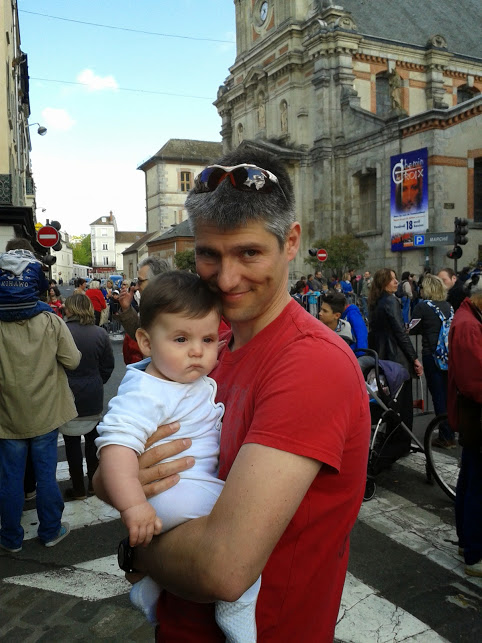 So we learnt from the experience, and haven’t been back to Font since. We’re planning another trip in a few weeks, this time with two babies, but instead of staying in a crummy city centre Ibis, we’re staying in the Novotel in the forest. It has gigantic rooms, so hopefully won’t be so difficult with children.

By far the best holiday we’ve been on as a family was to the Southern Alps. It’s a campsite Richard and I went to before we made the disastrous error of thinking our lives would somehow be more complete as a family. It’s located at 1800 metres, and is the last small village before all the alpine routes start, so it’s ideal as a starting point for some great mountaineering routes. It’s called La Berarde, and is up the mountain road from Bourg D’oisans.

This is how we used to camp, before children: 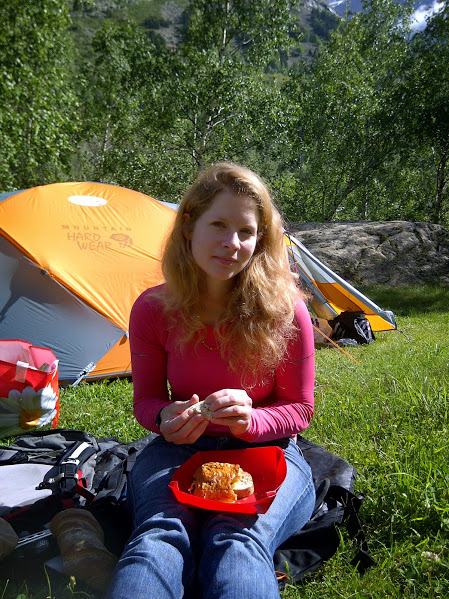 And this is how we camp with children: 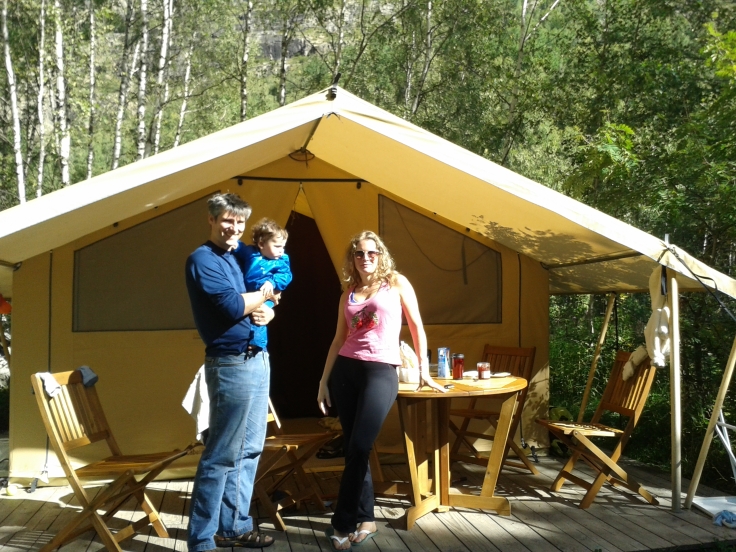 We learnt this the hard way; when we arrived,we pitched our big family tent. It was two degrees at night, and so windy that the sides of the tent flapped at the cot all night. Conrad was obviously rather frightened, and no one got any sleep. So we upgraded to these rather amazing glamping tents, and had the best week ever. Not much climbing was had, but we had some great walks up to some of the intermediate huts. I can’t seem to find the photos that include Conrad, but there was some nice scrambling with my sister.My mother was looking after Conrad at the time:

Shortly after the trip, we discovered we were expecting baby number two, which we were very excited about. As a result, there weren’t many exciting holidays. We went to the Gower with friends in February 2015, but it mainly rained, and there was no climbing to be had.

We went on a trip to Iceland in April 2015, when I was about six months pregnant, just before I was no longer allowed to fly without a doctor’s note. It was a really terrible place to go when pregnant; it was -6 degrees C during the day, with a biting cold wind, and all of the exciting stuff (like snowmobile trips) was not permitted either with toddlers or when pregnant. The best part of the trip was the few hours we spent in the blue lagoon. The rest of the time, I mostly cried, and was relieved to go home. The hotel was nice (Icelandair hotel Natura), but outside the city centre, so it was a hassle to get into town for dinner with Conrad, and we had pizza in the hotel restaurant every night. This is us in front of a hideously cold waterfall, in the hideous Arctic wind: 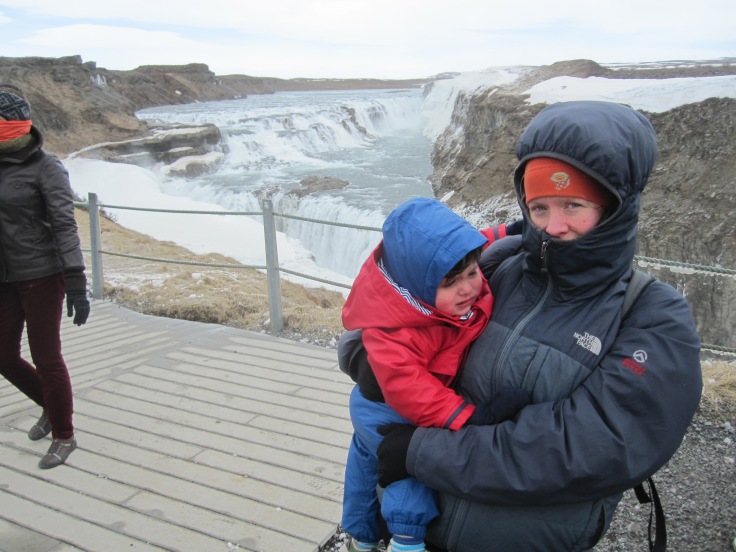 Richard took Conrad on a camping trip to North Lees on the 4th July, while I presumably spent the time sleeping. They had fun, apart from getting attacked by midges.

Sebastian finally made his appearance in August 2015. Olga wanted to do a cross country run in the Peaks on the 19th September, so we had a great weekend up there en famille, although the drive was pretty tough, as Sebastian was taking his time getting used to long car trips. We mainly wandered around the boulders, had a walk up Higgar Tor, and then a well-deserved cream tea in Hathersage. 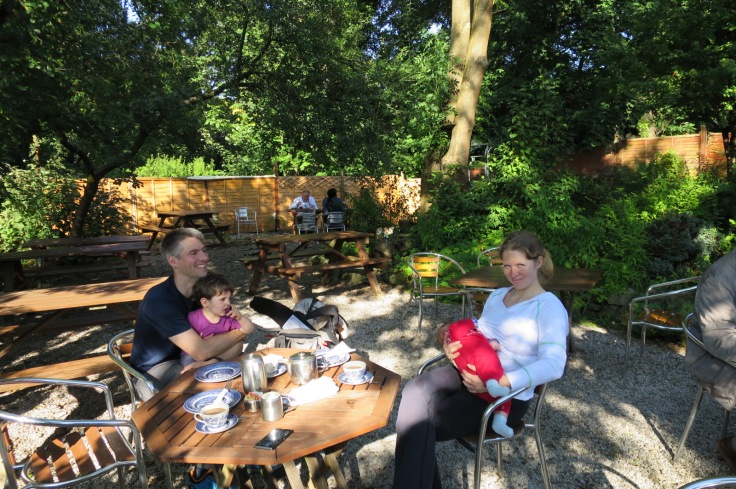 We turned around Sebastian’s passport application quite quickly, and all went to Spain with friends at the end of September, which was fabulous. It was really hot, we had a great villa with pool, and both our children slept. Unfortunately, our friends’ children didn’t, so they weren’t having quite such a great time. We were staying in Medina Sidonia, which is not far from Cadiz or Jerez. We flew into Gibraltar because I had a lot of BA miles to use up, and the flight times were more amenable to children. The most impressive bit of sightseeing was the Roman ruins of Baelo Claudia, which I could have spent considerably longer looking around if we hadn’t had hungry children and flights to catch. Here’s a picture that doesn’t quite do it justice: 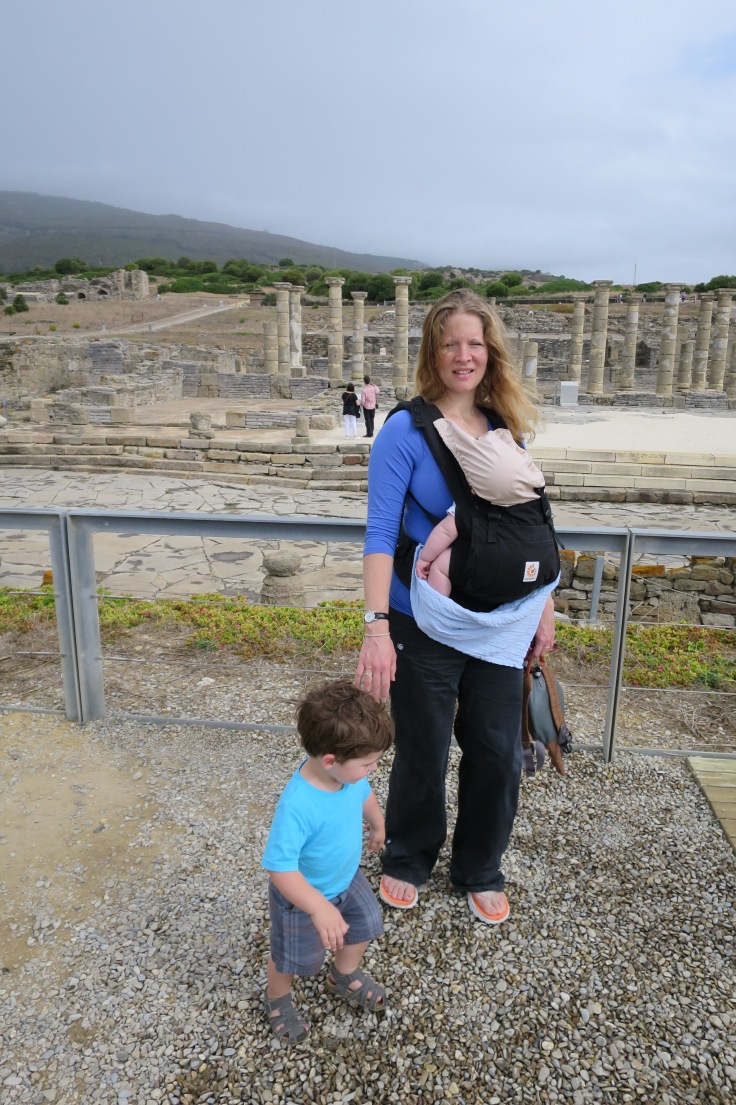 In November, we bought a Thule CX2 bike trailer. It fits both kids, and is worth a separate blog post as it’s just the most amazing piece of gear I’ve ever owned. It comes with an infant sling insert, as well as a massive trunk to put all the kids’ junk in. We’ve been on a trip to Dorset with it, but mainly I take the kids to  Sainsbury’s, the shopping centre, various bike paths across Milton Keynes, as they are all off-road. There’s a great little route up a former railway track to Newport Pagnell which I do quite regularly, and the trip across Campbell Park to the climbing wall at Kingston is a great bit of fitness. 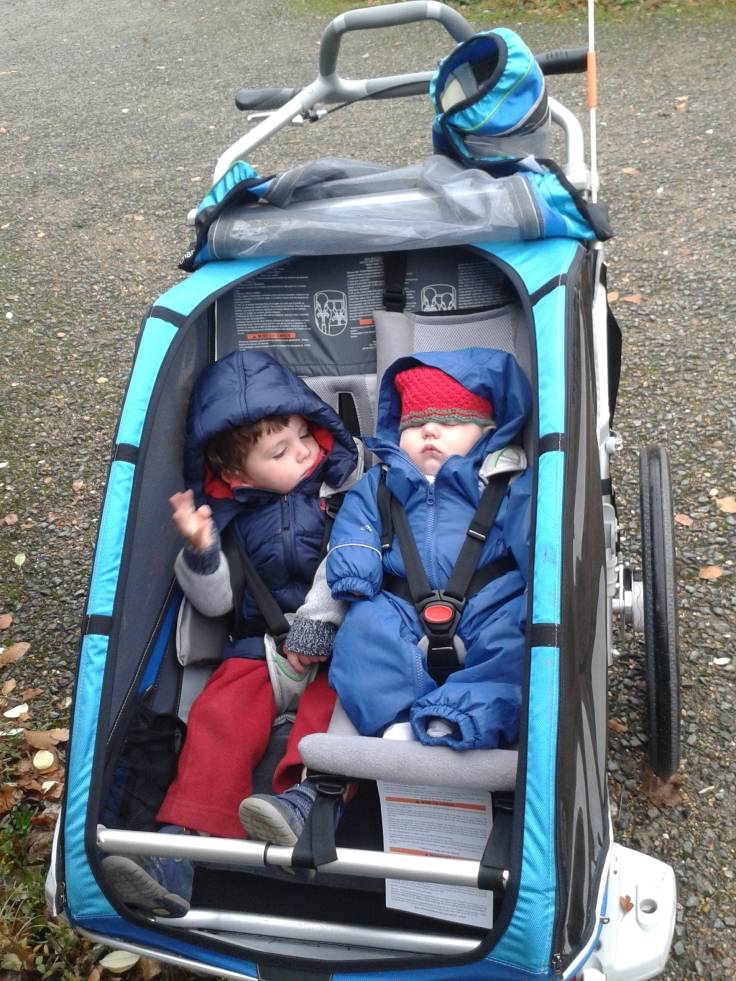 We also went on a quick weekend trip to Heidelberg at the end of November, to see my mother and enjoy the Christmas market. Unfortunately we both had hideous colds, and it was mainly wet and windy. Still, the Airbnb in the middle of town was a good pick, as it did make it a lot easier. It was a great location and the host very accommodating.

We’re trying not to spend so much money this year. Most years, we seem to spend about £3,000 in total on holidays. Our plans this year are just a long weekend in Font, and two weeks’ camping in France. That should come to considerably less than £3,000, although it’s rather easily done. Our Easter weekend isn’t really amounting to much so far; Good Friday was a walk around Woburn Sands, which has some good mountain bike tracks, but Sebastian is struggling with a cold at the moment, and thinks sleep is overrated. Still, Conrad had a great time on his bike: 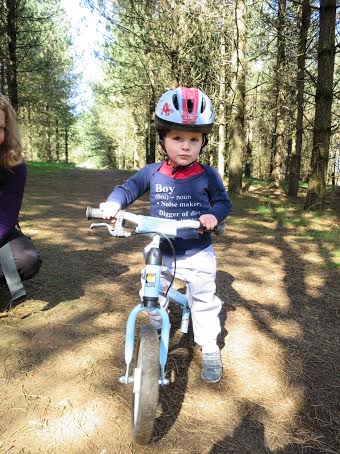