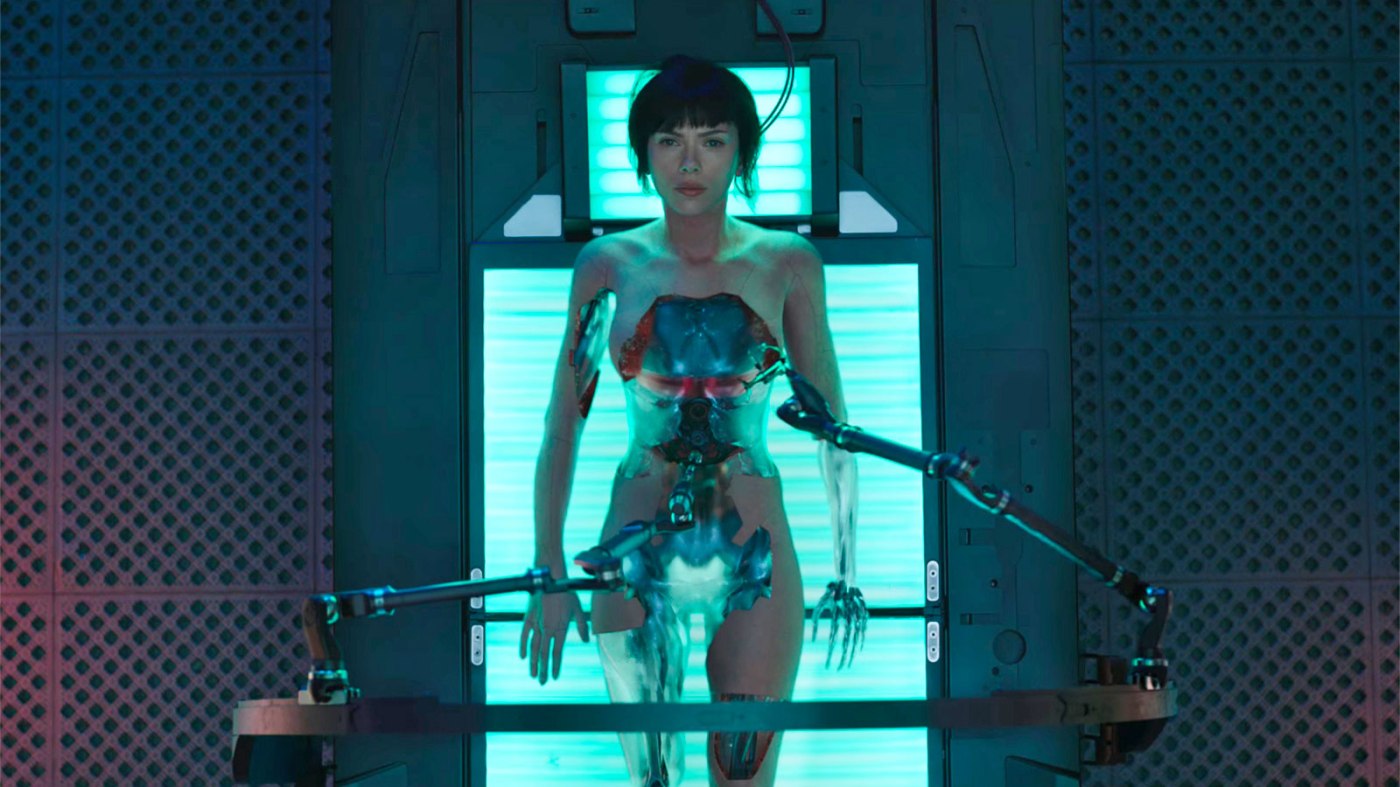 After a day of family stuff, got an impromptu offer of babysitting. Booked tickets for the Odeon online at 5 pm , for an 8.15 pm showing.  Ghost in the Shell, which we were hoping to catch, but had assumed we’d probably miss it and get it on streaming in about 6 months. We got a cab at 7.30 and hung out in Chimichinga having some nachos and margaritas. They were playing their usual mix of American easy listening; sounded like Tony Bennett, of course I can’t remember what generic 1960s track it was.

It was a somewhat predictable story, but a totally amazing film to watch. It’s quite rare to feel so absorbed into the world that a film creates. I  love watching Scarlett Johanssen; she looks so perfect, yet slightly alien, it works for those Übermensch roles she seems to end up getting in scifi movies.  The camera work was equally heavy on the close-ups as Lucy was. Her character is a cyborg who has been created by a robotics company, but works for the government defence division. It isn’t giving much away to say that the film centres around the balance of power between companies and governments. I suppose you could also read into it the balance of power between men and women. I liked what they did with the casting choice and the way they represented her body; she was wholly female, not movie star thin or even particularly ripped, but the superhuman strength thing was still completely plausible. It’s got to be every woman’s daydream, being that strong. Imagine being the one who protects your partner, who can take all the hits. It’s certainly refreshing to have a whole movie being carried by a woman who does not even express any romantic desire for her co-star, and only seems to have sibling affection for her fellow cyborg. My mind wandered to this whole ongoing debate about whether women are powerless, but I came to no firm conclusions. I think beautiful women have considerably more power than most men if they know how to use it (which requires both total self-awareness and a certain intelligence), but of course it wanes as they age. Beautiful men do not have the same advantage, but evil manipulative people in general have the edge for the majority of their lives. They might be unhappy, but they have control. And that’s about as far as  I got.

We sat in Frankie and Benny’s by the bar afterwards, drinking a Corona. They were playing exactly the same tunes as in the bar before. I was in a total buzz, looking at everything like it meant something, all the faux Americana, the deep wooden bar with the chrome edge, the red booths with white piping. The staff, in their retro shirts, bow ties and waistcoats, kind of wanted to pack up and go home, going through the usual end of day pipe cleaning routine. “Number 54, house with the bamboo door”. The sameness of the music made me think I had been sitting there for many days, silently, as if I too had implanted memories. Nothing is real, everything is perception, maybe Richard wasn’t really sitting there. The film feels very similar to Blade Runner in its theme. We were talking about the replicant test the other day, and I came across an article in The Wave (which I’ve never heard of, but maybe Americans have): they decided to interview all the candidates for a 2006 mayoral election, but gave them the Voight-Kampff test. None of them noticed, and the eventual winner of the election, and indeed subsequently rather bigger things, gave answers that could have come straight out of Harrison Ford’s mouth:

TW: You’ve got a little boy. He shows you his butterfly collection plus the killing jar. What do you do?
GN: I would tell him to… You know what? I wouldn’t know how to respond. How’s that for an answer? Is this a psychological test? I’m worried…

TW: They’re just questions, Gavin. In answer to your query, they’re written down for me. It’s a test, designed to provoke an emotional response.
GN: Oh, I got you.

TW: Shall we continue?
GN: Sure.

They conclude that Gavin Newsom is indeed a replicant.

The funniest answer though, and one which explains a lot about American politics at the moment, is this from Tom Ammiano:

TW: You’re in a desert walking along in the sand when all of the sudden you look down, and you see a tortoise, Tom, it’s crawling toward you. You reach down, you flip the tortoise over on its back, Tom. The tortoise lays on its back, its belly baking in the hot sun, beating its legs trying to turn itself over, but it can’t, not without your help. But you’re not helping. Why is that, Tom?
TA: That’s interesting. I don’t know. I’m a Republican?